Preparing Seminarians for Mission through the Village Immersion Program 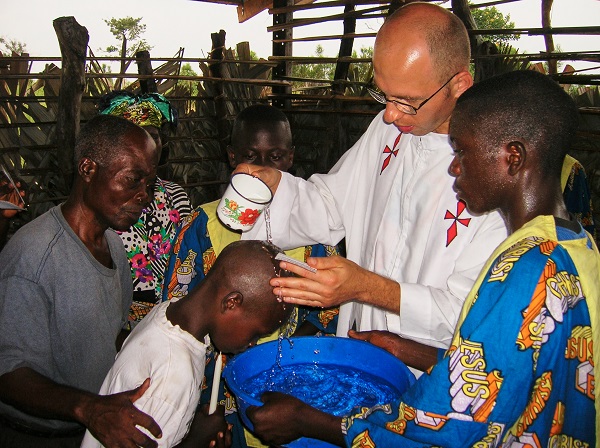 Seminarians who come to study at the St. Joseph Freinademetz House of Philosophy in northern Ghana find themselves strangers in their new neighborhood. The St. Freinademetz Formation House is located in Malshegu, a Muslim-dominated community in Tamale in the northern region of Ghana. The people of this area are Dagombas and their land is called the Dagbon traditional area, with Dagbanli as their language.

Although the formation hours and the seminary are located here, almost all of our vocations come from outside this area. Most of our Ghanaian seminarians are from the southern part of the country. The few from the north are not from the Dagbon traditional area. This means that all our seminarians are alien to the Dagbon culture and language, and so we wanted to institute a program to help the seminarians insert themselves into the worldview and culture of the area.

The Launch of the Village Immersion Program

We called this endeavor the Village Immersion Program, or VIP for short. The VIP is a language and cultural learning formation program for our seminarians. It teaches them to cultivate the basic skills and techniques needed to learn the language and culture of our Dagbon neighbors. The VIP helps the seminarians learn to enter in a fruitful dialogue with other cultures and religions and the importance of education cannot be overstated. The program is inspired by the missionary service at the heart of our order as spelled out in our Constitutions, which state, “To carry out our mission in a worthy and effective manner, we make every effort to master the language of the people and become familiar with their history and culture” (Cons. 120. 1). Because mission is the goal of formation, we establish programs such as the VIP to instill the missionary spirit in our seminarians right from the beginning of their studies.

The Village Immersion Program helps seminarians appreciate the culture of our neighbors here in Ghana and prepares them to live among new cultures in the future, depending on where they are assigned. Again, this adheres to our Constitutions: “Following the principles of the gospel, we respect the customs and habits of the people among whom we work, avoiding every derogatory criticism and comparison” (Cons. 120. 2).

The Village Immersion Program starts with preparation at the formation house. The seminarians learn the Dagbanli language in a mandatory two-year course as part of their academic curriculum. The Sunday apostolate program they follow during the academic year is also part of the preparation. After the academic year closes and the seminary goes on vacation, a three-day intensive orientation program begins. An expert in the local culture and language is invited to lecture on techniques for entering into the Dagbon life and speaking Dagbanli.

Immersion in the Villages

Immediately after the preparatory workshop, the seminarians go to the villages to start the program.

During their time in the VIP the seminarians will participate in community cultural activities such as infant naming ceremonies, marriages, festivals and funerals. As a supervisor of the VIP, I make weekly visits to the houses where the seminarians are staying, provide them with their food allowance and address any challenges that may occur.

At the end of the program, the seminarians return to the formation house and give reports of their experience. We use these reports to prepare the next program for the following year.

At the beginning of a new academic year, we reassign the immediate past VIP “graduates” to Sunday apostolate in the villages where they had their training. This program has a twofold purpose: to serve as a follow-up program for the most recent VIP graduates and to serve as a preparation for the seminarians who will participate in the next VIP session at the end of the academic year. For the graduates, it offers the opportunity to practice and perfect their language skills and deepen their relationships with the people. The bonds of friendship built during their one-month stay in the villages are strengthened by regular Sunday visits for the whole of the academic year. The language of friendship is not words but meanings.

Benefits of the VIP

This language and cultural learning program benefits our formation house and the life of our seminarians in many ways. The VIP offers these seminarians the skills to learn a new language and to enter a new culture. Through this program the seminarians learnt to appreciate and better understand the culture and worldview of their new neighbors, the Dagomba people. This program also opens the door to respect the cultures and languages of all people around the world.

The VIP helps our students appreciate inter-religious dialogue. The Malshegu community is mostly Muslim, and a cordial relationship exists between the Muslims and the Christian minority. This openness teaches our seminarians and the locals that in spite of cultural and religious differences, we can live and work as one people.

This is proved time and time again by our Muslim helpers who open heartedly accept our students into their lives and homes. With these seminarians living and working within the local community, the program naturally builds strong bonds of friendship.

By extension, the St. Freinademetz Formation House also makes friends. To celebrate these friendships, one Sunday during the second semester we invite all the helpers and their wives for a meal in the formation house. In turn, the helpers ask staff and seminarians to join their family special occasions.

The Village Immersion Program gives our seminarians first-hand experience of what mission is and what to expect when they become missionaries. It is there, at the beginning of formation, where future missionaries acquire their needed skills.

Want to learn more about how our missionaries are prepared for their apostolic work? Check out our digital resource "Impact on Education: Divine Word Missionaries Empower the Poor and Marginalized."