By Divine Word Missionaries on August 8, 2019 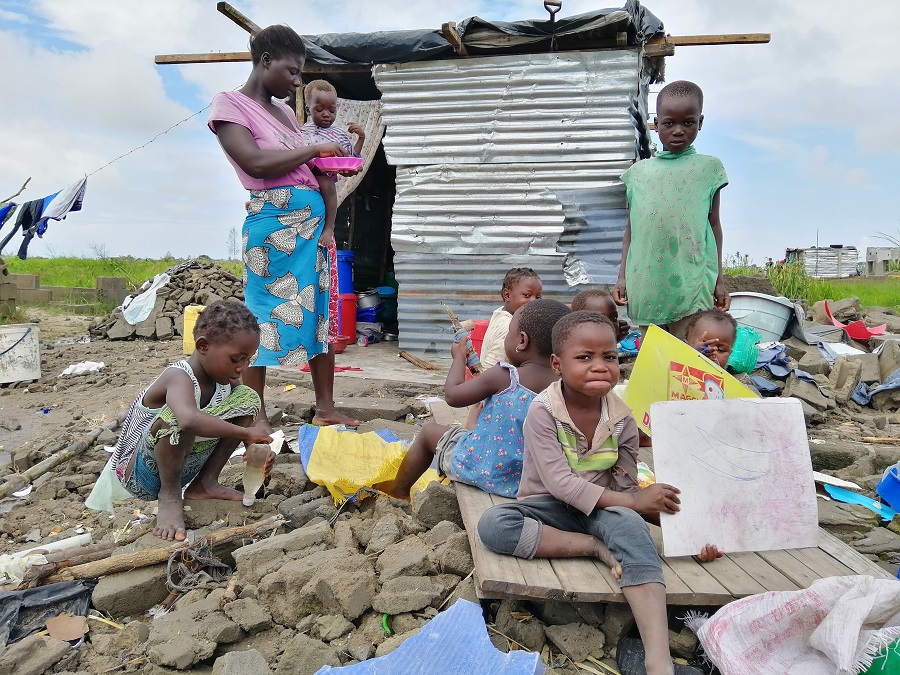 On March 14th, an intense cyclone made landfall in Mozambique, right near the port city of Beira, a town of about 500,000 people. Over the next few days, this storm dumped catastrophic amounts of water on the area, causing widespread flooding, death, and damage.

Some aid agencies have estimated that 90% of the area was destroyed.

One of our missionaries made his way to Beira recently in order to assess the damage and to help the three Divine Word Missionaries who live and minister in the Beira area. Today we are sharing updates and insights from his trip and asking you to stand in solidarity with the victims of Cyclone Idai who need emergency relief.

Understanding the Scope of the Humanitarian Crisis 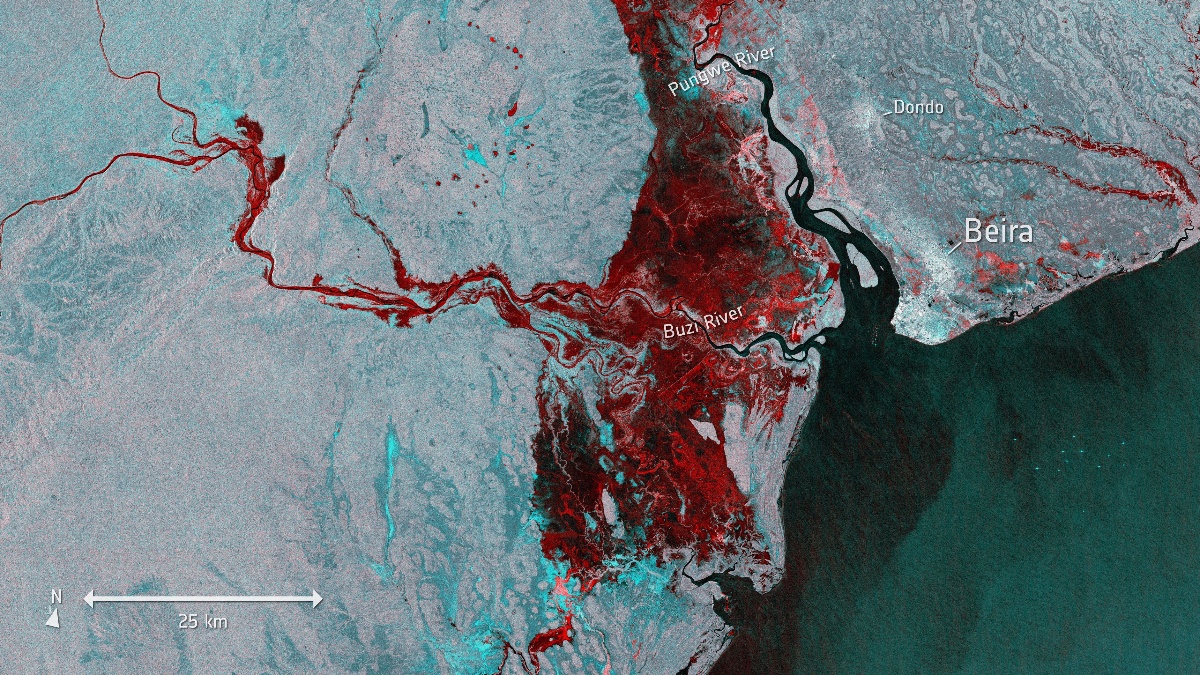 The European Space Agency captured this image of the flooding from space, the red represents the inland flooding around the port city of Beira.

Homes destroyed, impassable roads, no electricity, families separated, food and medical shortages: it's difficult to capture the immensity of the crisis in Mozambique and other surrounding countries in southeastern Africa due to the recent landing of Cyclone Idai.

Current estimates put the fatalities at over 1,000 people, and many people engaged in relief work think that this number is far lower than the reality of those who have been lost. There are also serious outbreaks of cholera reported and the conditions are so compromised that the outbreak of other infectious diseases is likely.

The High Commissioner for Mozambique in the UK described the flooding and devastation in Mozambique as a tragedy of biblical proportions.

We know from our brothers serving in Mozambique that the damage is very great and that the vast majority of the people in Beira either lost their houses completely or had their roofs blown away. They are struggling to find food, clothing and medicine.

Three of our brothers are based in Beira, a port city in Mozambique that sustained some of the worst damage and flooding due to Cyclone Idai.

Our three missionaries have been residing in Mozambique and ministering to the needs of a small, brand-new parish, made up of just five church communities. Now these churches and other facilities have been destroyed.

Last week, Father Johnson Furtado, the Regional Superior of the Mozambique Region, managed to visit Beira and brought back news from the front lines of the relief work. Although their homes and churches are gone, our missionaries and their communities are not despairing. Instead, they are working to help each other and those less fortunate.

Here's What We've Done So Far to Help

Our missionaries have already distributed food items for approximately 500 people. They are in the process of gathering more resources in order to help even more individuals.

The parish community of São Francisco Xavier, Ndunda formed a volunteer team called “Activists of Charity” with 12 volunteers from six different communities. The team reviews and assesses the needs in the communities to identify destitute people such as widows, the abandoned, the sick, and elders who have no one to help them.

The team also prepares relief bags for distribution. This has been made possible thanks to the Beira diocese and some other religious congregations who donated relief materials to the team. Each packet is composed of:

On April 2nd, the bags were distributed to 90 families in different communities. On April 3rd, another 90 families got the same relief bags.

However, more people need help. Food materials are limited in the market in Beira because it is so difficult to bring in food supplies from other areas. The team will continue to reach out to the people in the coming weeks, but they need more resources. 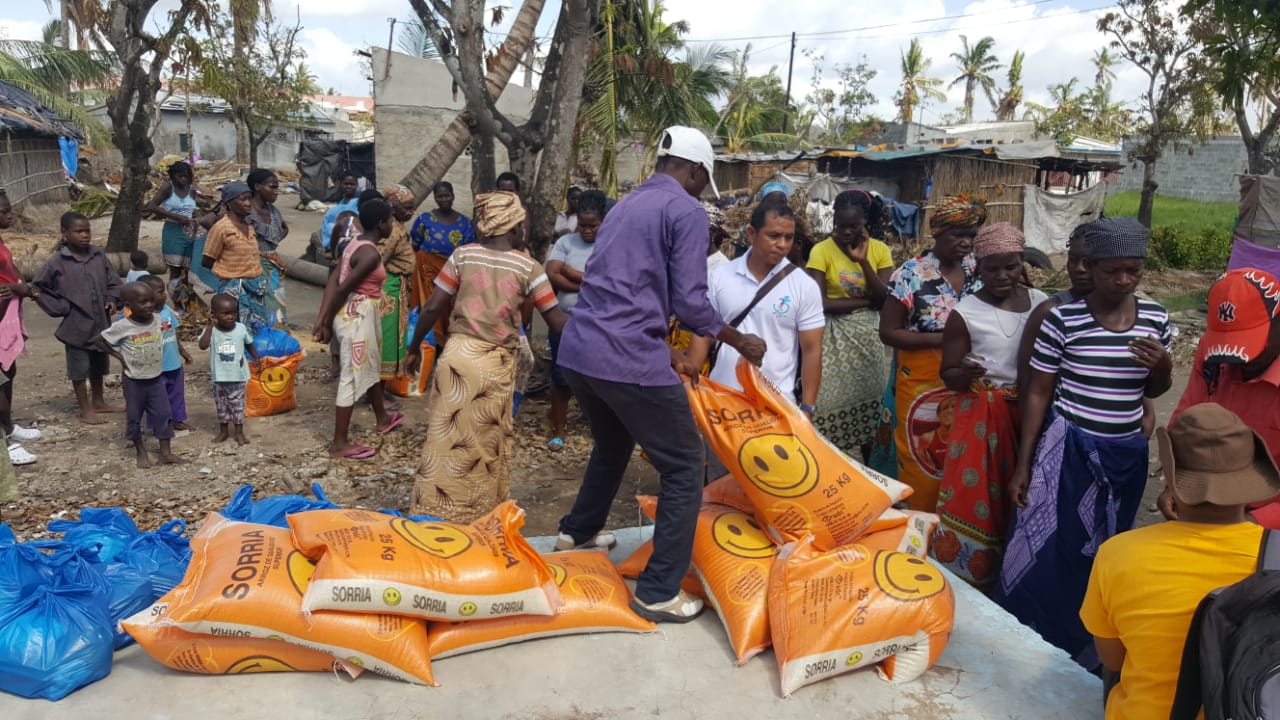 Here's What You Can Do to Help Victims of Cyclone Idai

We need your help offering relief to the victims of Cyclone Idai. If you are able to give any amount, large or small, your funds will help provide the following aid to people who desperately need our support and help:

When you support relief efforts, your money goes directly to help the victims of Cyclone Idai in Mozambique and will be used for both immediate relief efforts now and the long-term rebuilding of our parish and church facilities.

Our missionary brothers in Mozambique and all victims of Cyclone Idai are counting on our humanitarian help.

Can you support our relief efforts in Mozambique today? We need your financial gifts and your prayers!