Celebrating St. Arnold Janssen: Here's What You Need to Know About This Catholic Missionary Priest

By Divine Word Missionaries on January 15, 2019 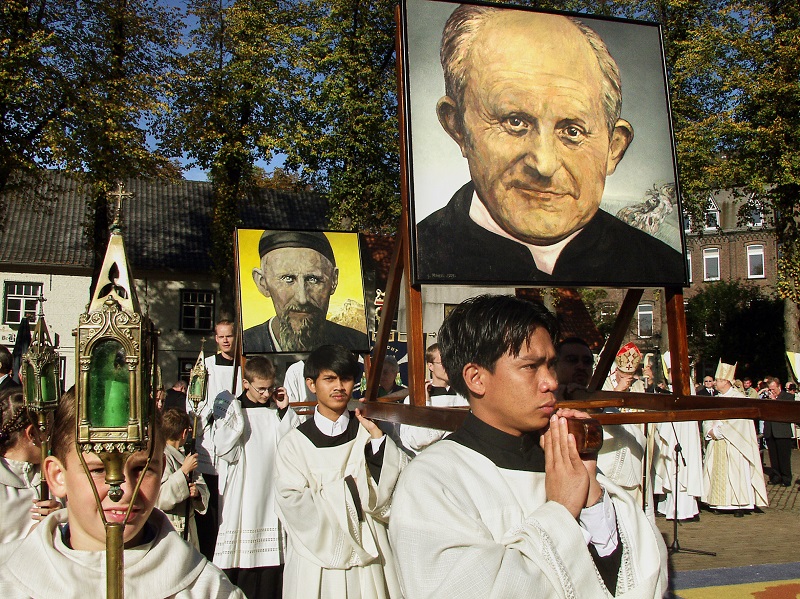 When Fr. Arnold Janssen founded Divine Word Missionaries in 1875, his dream was to make Jesus known to every person in every nation. Today, he is remembered as a saint of the Catholic Church and as the founder of the Society of the Divine Word, the largest Catholic missionary order in the world.

This January, as we celebrate the feast day of this little known saint (January 15th), we want to share more of the story of this German priest, his religious order, and what his missionary zeal means for our world today.

Who Was St. Arnold Janssen?

Arnold Janssen was born on November 5, 1837, in Goch, a small city in the lower Rhineland of Germany. The second of eleven children, he was raised by devoted Catholic parents who taught him to consider the worldwide missionary needs of the Church. The family’s prayer, which would come to guide Arnold in his life’s work, included a nightly rosary followed by the Prologue of St. John’s Gospel, "In the beginning was the Word and the Word was with God and the Word was God."

As a young man, Arnold studied natural sciences at Bonn University and qualified to teach high school. He went on to study theology and was ordained a priest on August 15, 1861 for the Diocese of Münster. As his first assignment, he taught natural sciences and mathematics at a secondary school in Bocholt, where he was known as a strict yet fair teacher. In 1869, Arnold was named diocesan director of the Apostleship of Prayer because of his profound devotion to the Sacred Heart of Jesus. This apostolate encouraged Arnold to open himself to Christians of other denominations.

As the years went on, Arnold became more aware of the spiritual needs of people beyond his own diocese. He grew restless wanting to devote himself more deeply toward the universal mission of the Church. In 1873, he resigned from his teaching post and dedicated his life to awakening missionary vocations in the Church in Germany.

His Zeal for the Mission Encounters Obstacles

In 1874, he began to publish The Little Messenger of the Sacred Heart, a popular monthly magazine which shared news of missionary activities and encouraged German Catholics to do more to support the missions. Soon after, Arnold set his sights on establishing a seminary and training center to prepare German priests to bring the Gospel to places where it had never been preached. But times were volatile in Germany and such religious schools were forbidden. German Chancellor Otto Bismarck unleashed the "Kulturkampf" with a series of anti-Catholic laws. Priests were expelled and many bishops were imprisoned. In light of such chaos, Arnold proposed that some of the expelled priests go to the foreign missions or help in the preparation of missionaries. Slowly but surely, with a little prodding from the Apostolic Vicar of Hong Kong, Arnold discovered that God was calling on him to undertake this difficult task.

Many people said that Arnold was not the right man for the job, or that the times were not right for such a project. The German archbishop said of him, "Take a good look at him. With the Kulturkampf raging around us, he wants to start a mission seminary!"

At one point, Arnold went with some Ursuline nuns to discuss his plans with J. A. Paredis, Bishop of Roermond, who said, "He wants to build a mission house and he is penniless. He’s either a fool or a saint." Arnold, undeterred, responded, "The Lord challenges our faith to do something new, precisely when so many things are collapsing in the Church."

Escape from Germany and Founding of First Mission

With no support from his archbishop, Father Arnold eluded Chancellor Otto Bismarck’s German government and the religious persecution of the Kulturkampf by emigrating a short distance into the Netherlands. He settled in a little inn on the banks of the River Maas in Steyl, Holland, and invited other priests and laymen to join him.


On September 8, 1875, he inaugurated the Mission House and founded an order of priests and Brothers whose sole purpose was to preach the Gospel in foreign lands. He named the order "The Society of the Divine Word," honoring the special devotion he developed in his childhood with those evening recitations of St. John’s Prologue. His critics had clearly underestimated the vision, courage, and strength of this young priest.

Aware of the importance of publications for attracting vocations and funding, Arnold started a printing press just four months after the inauguration of the Mission House. Thousands of generous lay persons contributed their time and effort by helping to distribute the magazines.

On March 2, 1879, Arnold’s dream became reality when the first two Divine Word Missionaries set out for China. One of these was St. Joseph Freinademetz, who devoted his life to establishing China’s first Christian communities and was canonized a saint in 2003 by Pope John Paul II.

As the missionary work expanded, the devoted women volunteers at the Mission House, including Blessed Maria Helena Stollenwerk, grew eager to serve the mission as religious sisters. Recognizing the faithful, selfless service they freely offered and the important role women could play in missionary outreach, Arnold founded the mission congregation of the Missionary Sisters Servants of the Holy Spirit (SSpS) on December 8, 1889, and the first sisters left for Argentina in 1895.

Also in 1895, Brother Wendelin Meyer SVD was dispatched to the United States. His work led to America’s first seminary, which was established north of Chicago. It was dedicated to training candidates to serve as missionary priests and Brothers in foreign lands. This mission continues today at Divine Word College in Epworth, Iowa.

Back at Steyl, in 1896, Arnold selected some of the religious sisters to form a cloistered branch and founded the Sister-Servants of the Holy Spirit of Perpetual Adoration (SSpSAP). The sisters devote themselves to prayer and perpetual adoration for the missions and for the other two active missionary congregations.

The Legacy of St. Arnold Janssen

Arnold guided the mission faithfully until his death on January 15, 1909. He was beatified in 1975 by Pope Paul VI and then canonized a saint in the Roman Catholic Church on October 5, 2003, by Pope John Paul II.

Arnold’s devotion to service and his dream of bringing the Gospel to places where it has never been preached continues on today. More than 6,000 Divine Word Missionaries are active in over 80 countries, as are more than 3,800 Missionary Sisters Servants of the Holy Spirit and more than 400 Sister-Servants of the Holy Spirit of Perpetual Adoration.

St. Arnold liked to say that "Proclamation of the Good News is the first and most significant expression of love for one's neighbor."

We are grateful for the service, love, and impact of the life of St. Arnold Janssen.


Would you like to support St. Arnold’s legacy? Give a missionary priest vital items for their spiritual ministry abroad!