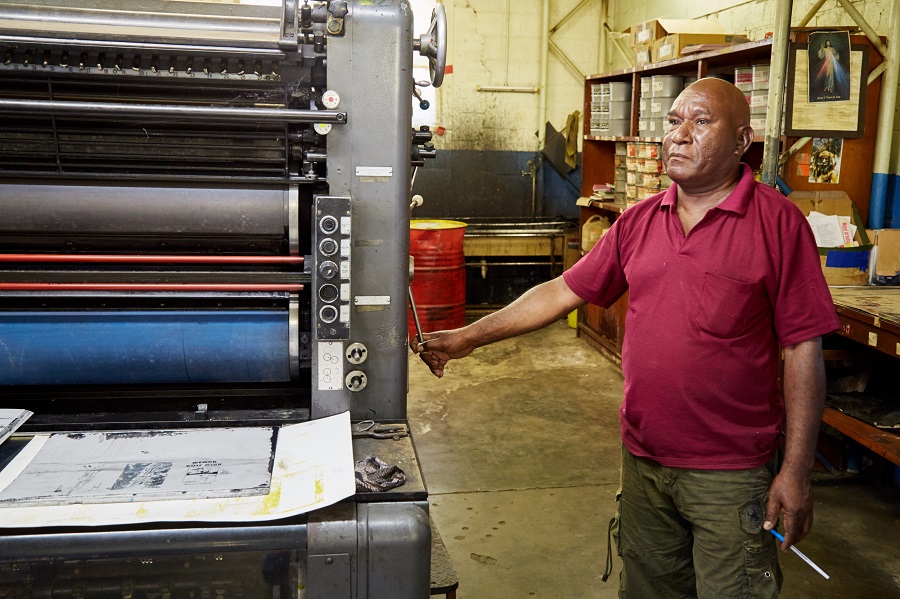 Father Frank Mihalic SVD was head of the Communication Arts Department at Divine Word University from 1982 until his retirement in 1997.

Originally sent to Papua New Guinea in 1948, Fr. Mihalic wrote the first English lexicon of Toks Pisin, a form of Melanesian Pidgin English that is one of the country’s three official languages. The Pennsylvania native would write many more Pidgin dictionaries and grammar books, as well as a history of Divine Word Missionaries in Papua New Guinea.

In 1970 he developed the nation’s first Toks Pisin newspaper despite having no previous journalism experience.

"One of the things we are going to have to settle before we even start printing is the smoke-ability of the paper we are using. That will help to sell papers. People here have the custom of rolling their home-grown tobacco into cigarettes with newsprint. They don't like the usual thin tissue paper for roll-your-owns. It burns too fast. They like newsprint—but not every kind—it must burn a certain way and produce a white ash. So we are experimenting among our staff with various samples from the paper manufacturers. We want to make sure that we have the best smoking paper in the country. Then we can advertise it that way. And well have to print a warning on the front page stating: PLEASE READ THIS PAPER BEFORE YOU SMOKE IT. Maybe someday we'll get into the Guinness Book of Records as the most smoked newspaper in the world."

Fr. Frank began his newspaper with no focus, no printing equipment and no media experience. He gained all three within a year. Bishop Arkfeld agreed to print the new newspaper on the Wirui Press. The offices were set up in Wewak. Fr. Frank trained the staff for the first issue himself, and he focused on getting the paper in the hands of nationals. The paper, Wantok, is still being published.

At the time he explained: "Wantok is a typical Pidgin word which literally means someone speaking the same language. The word also implies being a friend, a chum, a confidant. We want the paper to be all those things to its readers."

In 1981, Fr. Frank Mihalic was awarded the Order of the British Empire for “services rendered to Pidgin.” He also received an honorary doctorate of linguistics from the University of Papua New Guinea. Fr. Mihalic retired to the Divine Word Missionaries residence in Riverside, California, where he died in 2001.

Read more about the missionary efforts surrounding the importance of education by exploring our digital resource "Impact on Education: Divine Word Missionaries Empower the Poor and Marginalized."