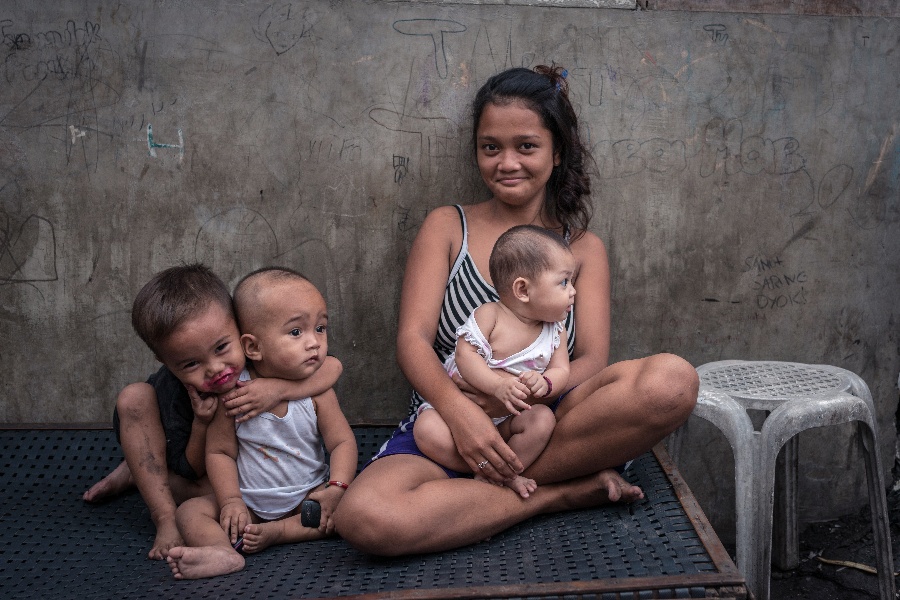 Every day in the southern Philippine metropolis of Cebu City, as many as ten thousand young women are forced to sell their bodies. Priests, sisters, and our own Brother Paul Bongcaras are there working to help them escape from that life.

Cindy lays her pencil on the table. For three weeks she has been working meticulously, and now her drawing is finally finished. It depicts a young man with his gaze fixed on heaven. Pedro Calungsod was a young Filipino catechist of the seventeenth century who worked as a missionary in Guam. It was there that he was martyred for his faith. Pope Benedict XVI canonized him in 2012.

Cindy has not been drawing for very long, but she is very enthused about her new hobby. It helps her to forget. You see before Cindy arrived at the shelter run by the Sisters of the Good Shepherd, her life was in ruins, a reality which she shares with the forty other young women who have found refuge here.

When Cindy begins to tell about her life “before" her voice soon breaks. The eyes of the pretty young girl fill with tears. Cindy comes from the island of Mindanao. Her birth mother did not have enough money to feed her, so she sold her child for three hundred pesos, a little bit less less than seven US dollars. Her new “parents” beat and abused Cindy.

“That’s the reason I ran away,” remembers the now twenty-year old woman. “At first, I lived on the streets. I had to steal in order to survive. Then I heard that there were a lot of good paying jobs available in Cebu City. And so I made my way there.” Someone promised Cindy a job as a cashier in a bar. Instead, they forced her to work as a guest relations officer (GRO), a euphemistic designation for a prostitute. Prostitution is officially forbidden in the Philippines. But when men escort the barmaids from their jobs and take them to a local hotel room, local officials look the other way. As a result, brothel managers keep the girls like slaves, selling them to ten or more clients each night — business people, sailors, workers, and foreign tourists.

The girls are made docile by filling them with drugs and alcohol, their meals are withheld, and they are thoroughly browbeaten. Even when they inevitably become pregnant, they are forced to continue working until the seventh month of pregnancy. Cindy also became addicted to drugs, until she was arrested by the police one day. She was put in prison, where later her son, Vincent, was born. Behind bars with her baby, Cindy had the feeling that she could not sink any lower. But then someone came along and lifted her up. It was Brother Paul Bongcaras SVD, a Divine Word Missionary Brother.

Bro. Paul has white, thinning hair, plays the ukulele, and absolutely loves to tell jokes. Bro. Paul is the very personification of joie de vivre, the zest for life. The sixty-nine year-old religious Brother spends night after night walking the streets of neighborhoods where human suffering could not be greater.

It is 9:00 p.m. as he parks his car at a busy intersection in the middle of Cebu City. Homeless people have camped out on the nearby sidewalks in an attempt to get a night’s sleep. They crawl out of their makeshift tents so that the missionary can treat their sores and administer some basic first aid for their many ills.

In the middle of a traffic island, Bro. Paul comes across a sleeping boy. Those standing around tell him that the boy does not have a father anymore and that his mother has turned to prostitution in an attempt to provide income for herself and her children.

“We don’t judge these women for what they are doing,” Bro. Paul says as he gets behind the wheel of his car. “We try to give them the feeling that we are with them on the road they are traveling. Their lifestyle is born out of their need. We’re all sinners. No one is perfect in this world. There is a way that they can escape from the life to which they have fallen hostage.”

Bro. Paul is continually lowering the car window to talk to people. He knows the girls along the sides of the road. He is always ready to listen to them and is constantly encouraging them to pay attention to cleanliness and hygiene for the sake of their health.

“In the beginning, I ran away when Bro. Paul tried to talk to me because I thought that he must be from the police,” remembers Georgio, a lanky pimp standing in front of a seedy transient hotel. “But all he ever really wants is to find out whether the girls are alright or not.” What? He is talking with the pimps? Bro. Paul is used to criticism of his courageous and unorthodox involvement in the redlight scene, even from other representatives of the Church.

“Anyone who wrinkles his nose at what I am doing should just come with me once when I make my nightly rounds and see for himself how things are,” he says. “We can’t close our eyes to reality. Just because the rest of society doesn’t want to have anything to do with them, it’s important that we accept those girls as they are.” Sometimes it is harder to ask for permission than for forgiveness. That is Bro. Paul’s motto of life. Already in the early 1970s, the Divine Word Missionary had people talking about him as, in addition to his studies in psychology at the University of San Carlos, he began his social work in the slums and red-light districts of Cebu — without the permission of his superiors. “In the eyes of our provincial superior at the time, I was a rebel,” Bro. Paul remembers. “He was afraid that by doing what I was doing, I would be endangering both my health and my vocation as a religious Brother.”

Then, in the early 1990s, after fifteen years of missionary work in Papua New Guinea, Bro. Paul returned to the Philippines to take up a teaching position at San Carlos University and, quietly at first, resumed his nighttime visits to the homeless people and the prostitutes of Cebu City. “I only got the ‘official blessing’ in 2003 when one of the general visitors from Rome went along with me one night on my rounds in the red-light districts and wound up recommending my work there.”

Today, Bro. Paul has a budget for his socio-religious work with the poor and the marginalized. He now also has the full support of his order’s leadership. Often he sits until well after midnight in the red-light establishments of Cebu City encouraging the girls to make a whole new start. He tells them of other girls who succeeded in finally getting out of the life. He tells them about the shelter of the Sisters of the Good Shepherd where the girls from the red-light districts are always welcome. He tells them about kind Sister Antonietta, whom many of the girls now look upon as their mother. He also tells them about the recovery center on the outskirts of the city for young women who sincerely have a desire to get away from the life of prostitution.

Today, Cindy is living at the center — and could not be happier about it. “Here, it feels as if we all
are part of one large family,” she says. “I am so thankful that I am being allowed to stay here. My life has changed completely. I have discovered that I can do good things.” Bro. Paul visited Cindy in prison and encouraged her to make a new start. The Sisters have supported and helped Cindy free herself from drugs and alcohol. The young woman can now read and write. She has learned to sew and to tend a garden. In every free moment, she either draws or reaches for her guitar. “One of the other girls taught me how to play the guitar,” she says. Closing her eyes, she strums the first measures of Adele’s “Rolling in the Deep” and begins to sing.

Sometimes Bro. Paul comes to visit Cindy when he brings to the shelter a new girl whom he met on his nightly rounds of the streets. When that happens, Cindy tries to be especially caring and helpful. At night in the dormitory, when she senses that the new member of the family is trembling with anxiety, she wordlessly hands the girl her teddy bear named Blue. He comforted Cindy after many a nightmare. “I want to be there for the younger girls just like the Sisters were there for me when I first arrived,” says Cindy. What does she hope to do for a career? She wants to help abused girls. “In that way I can give back a little bit of what God has done for me.”