We are more than halfway towards our goal of $10,000 to raise money for our life-changing education programs. Please consider supporting us to reach our goal!

Empowering the Church in Chad: A Story of Hope from the Parish Pastor 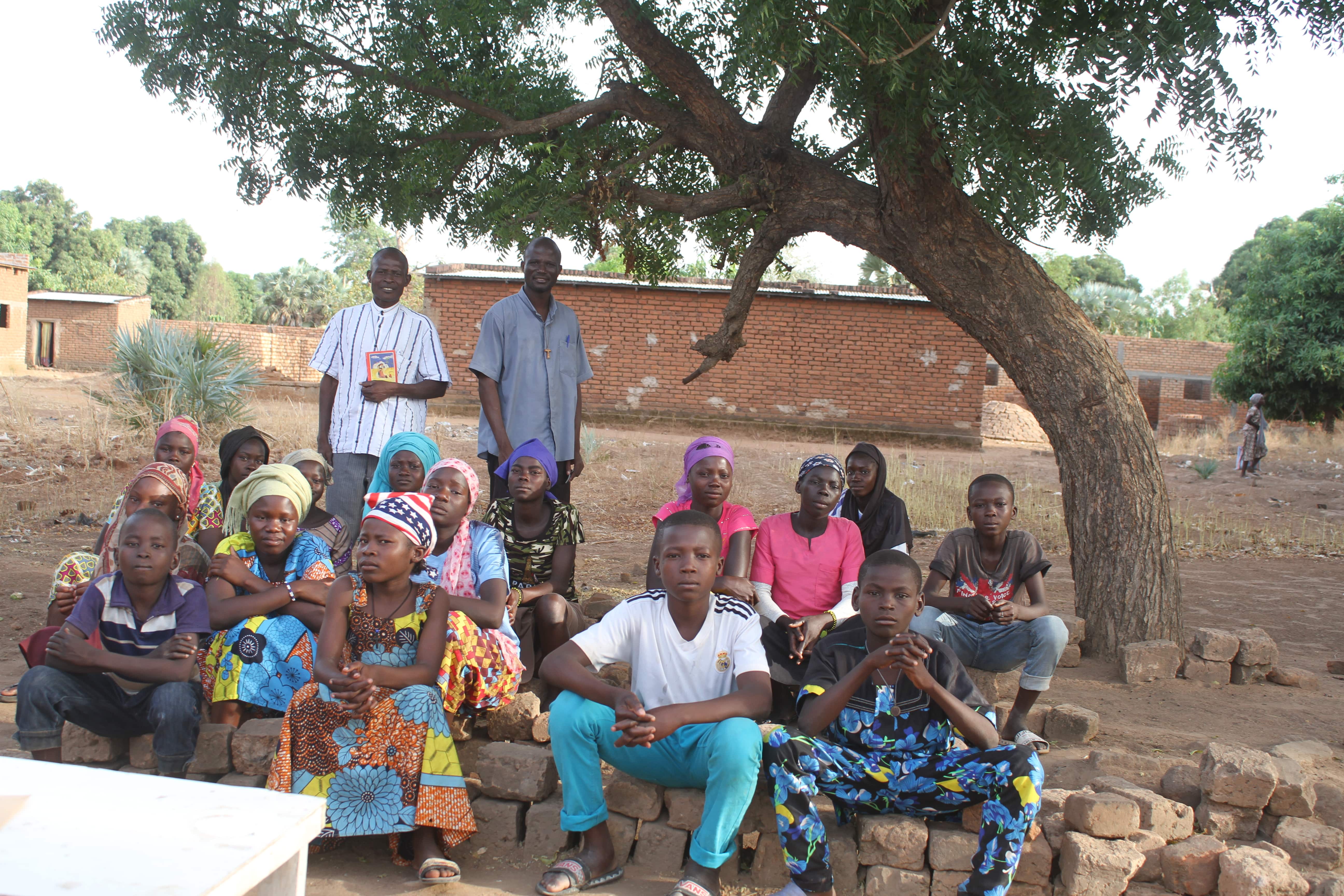 Something beautiful happens when we abandon our plans for God’s plans. Meet Father Thierry Koula SVD. It wasn't until he became one of the most promising young teachers in Togo that he felt God calling him to something a little different—to become a teacher of God’s people. His passion for improving education in Togo has developed into a passion for building the Catholic community in Chad as the pastor of Sts. Peter and Paul Parish.

Fr. Thierry is currently working to finish construction on a parish hall, which would greatly benefit the entire community. Here is what he had to share about the challenges and opportunities he and his parish are facing:

A Priest Returns to Africa

As a final-year student of theology in Chicago, I was asked by our superior general to give my three options for my first assignment, the eventual mission destination after the final profession in the Society of the Divine Word. The Chad Mission was one of the three. It was with mixed feelings that I put in that choice, a year before my ordination in 2016.

I was delighted to go back to Africa and fulfill my vocational dream: to serve God’s people in the remote areas of Africa, the continent where I had my roots. I was born in Togo, a small country in West Africa. Africa probably needs more priests than other continents. Many Christian communities in Africa will go an entire year without seeing a priest. Thus, it was my deep desire to serve in Africa if God allowed me to be ordained to the priesthood.

And yet, I felt uneasy about going to Chad.

I still remember the reactions of some friends when I told them. Most were seriously scared and warned me that I made the wrong choice! They said that Chad has a very hot climate and a high number of malaria cases and that it lacks basic amenities: running water, electricity, health care centers, food and internet connection. Terrorist groups such as Boko Haram operate from  Chad’s neighboring countries. Opting to go and live there, leaving the comfort zone of the United States, sounded and felt scary indeed.

Recalling the example of St. Joseph Freinademetz, the first Divine Word Missionary to China, gave me courage and hope. Trusting in the Lord’s providential care, the call became easier and fear gave way to hope.

I was assigned to Sts. Peter and Paul Parish in Moundou as the assistant parish priest. The church is full and vibrant on Sundays! Whether in the parish or at the outstations, all seats are occupied and many people are standing outside during Masses.

But I realized that the joyful people that I met during the Eucharistic and other celebrations hid a great deal of anguish and turmoil. Parents are not able to take care of their children. Educational and health structures do not exist, and those that exist are not well-equipped. Alcoholism and HIV/AIDS are rampant among parishioners. The majority of teenage girls gets pregnant. In addition, there isn’t enough infrastructure within the parish. In Chad, a priest is everything and this drains us a lot. Nevertheless, I am joyful to serve the people who are really in need.

“Our Hope is Bold”: Four Opportunities for Growth and Healing in Chad

No. 1 Building the Physical Church

I still remember my first Mass on the feast of Christ the King in 2018 in one of the outstations.

We drove past some small buildings, and I saw a huge crowd under a tree. I asked the catechist what they were doing under the tree on a Sunday morning, and he told me that they were waiting for us to celebrate the Mass! Jesus was born in a manger in Bethlehem; it was not surprising to celebrate his kingship under a tree! But I was shocked.

There are many well-built churches that are empty in other countries, but here in Chad hundreds of Christians do not have even a simple building to celebrate Mass. We are obliged to stop Eucharistic celebrations during the five-month rainy season for want of roads to reach those communities.

Since I became the pastor of Sts. Peter and Paul Parish in 2018, I have been encouraging the Christian communities to collect money to build their chapels, but it has not been easy. In the Human Development Index, Chad is ranked 187th out of 189 countries in the world for development.  Of its population of 15.5 million, 66.2% live in severe poverty. Many people live with less than $1 a day. Some Christian communities that tried to build their chapels stopped once the roof was in place because they could not get enough money to complete the chapels.

Thus, we rely on foreign aid to get basic parish structures done. We are thankful to the many donors who support Divine Word Missionaries for their generosity. Thanks to their financial support, we have recently roofed two chapels.

No. 2 Spiritual Growth Through the Sacraments

When I was the assistant parish priest, I was in charge of the youth and the vocation ministry. Though Chad has a lot of Christian youth, few young people enter the seminaries or the convents. Parents think that their child becoming a priest or a religious Sister is not beneficial to the family economically. Parents want their boys to get good jobs, earn a lot of money and take care of them. And for girls, many parents do not allow them to choose the consecrated life because they need dowries! Every year local statistics show that fewer than 10 young men are ordained priests in the whole country—a major pastoral concern for the Church in Chad.

My sadness regarding the few vocations to the priesthood and religious life is diminished by the huge number of candidates to the other sacraments, particularly baptism, the Eucharist and confirmation. Sts. Peter and Paul Parish has about 3,000 catechumens for these sacraments who are engaged in six years of training and accompaniment. Every year, the parish prepares about 500 adult catechumens for baptism and 300 Christians for First Communion and confirmation! About 40 couples on average are married in the Church every year.

St. James wrote: “What good is it, my brothers and sisters, if someone claims to have faith but does not have works? Can such faith save him? If a brother or sister is without clothing and in need of daily food, and one of you says to them, ‘Go in peace, be warmed and be filled,’ yet you do not give them what is necessary for their body, what use is that?” (James 2:14-16). With these words in mind we have founded a parish Caritas organization that collects money, food items and clothing the first Sunday of the month and redistributes those items to very poor families.

We also encourage and guide poor people to take up activities that will earn money to take care of their families. At the beginning of the rainy season, we help farmers plow their lands and get good seeds. We began a vegetable garden project for a group of mothers in our parish. We also support some women to do small trades to care for their families.

As the parish priest, I am concerned about how the widows are treated. After the death of their husbands, many women are kicked out of their conjugal homes, and the belongings of their husbands are taken away by force. The parish has decided to found an association of widows called the Little Sisters of St. Anne in order to care for these widows.

No. 4 The Parishioners’ Holistic Health and Well-being

Another pastoral challenge for us is the basically nonexistent health care and school structures.

Most of the public hospitals lack qualified personnel, running water, electricity and a sufficient number of beds for the inpatients! Sick parishioners often come to us asking for prayers and blessings, knowing that life itself is at stake. We make it a point, after the prayer and blessing, to consult a medical doctor. The parish vehicle often functions as an ambulance.

Regarding the schools, I am heartbroken.

Out of the nine months of courses, students go to school for maybe three months. Most teachers are not qualified. The rate of illiteracy among youth is around 70%. The situation is even more alarming among girls, where the rate is as high as 77%.

What could we do as a parish to improve the rate of literacy among youth, especially girls?

Most of the solution resides with the government, but the parish council decided to encourage parents not to neglect the education of girls. Here in Chad, girls are married at a young age and parents do not invest in their education. The parish has been taking care of the school fees of about 100 girls at all levels of education. We have decided to start tutoring classes in reading and mathematics in the parish for primary and secondary students. We hope that these tutoring classes will raise the rate of literacy.

Another phenomenon at Sts. Peter and Paul Parish is the high rate of alcoholism. One can see people sitting down the whole day drinking, mostly during the dry season. The parish has decided that the vegetable gardening project also will combat the evils of drinking habits. We have two vegetable gardens in the parish that are run by women and men who used to sell or drink alcohol. Now they grow all kinds of vegetables that they sell in the local markets or use for their own cooking. It’s been a success in our efforts to bring sobriety to men and a bit of financial security to those mothers.

Amidst the Struggle, There Is Great Joy

My four years in Chad as a Divine Word Missionary have been filled with great joy. With the providence of the Triune God and the generosity of many benefactors around the world, I am able to impact people’s lives. Most of my happiness comes on Sundays when, during the Eucharistic celebrations, I see hundreds of people in the church singing and dancing joyfully despite their struggles. My happiness comes when some families that hardly eat bring some food, fruits, chicken or eggs to show us their appreciation and gratitude. Indeed, there is hope; our hope is bold.

you Can Make a Difference - Support the Mission in Chad

Through the parish’s many projects and ministries, the community in Chad is working together for their future—but they need help. With so many surviving on less than $1 each day, the completion of the parish hall will bring tremendous hope and healing, as well as create jobs for the local community. Please pray for the community and consider helping us build this parish.

Learn more about this three-phase project to finish construction on the church hall in Chad, and give to the mission.

The Three Pillars of Lent: Prayer

5 Ways You Can Work Toward Peace and Justice

A School Making a Difference: Education ...