Consultation Under a Tree 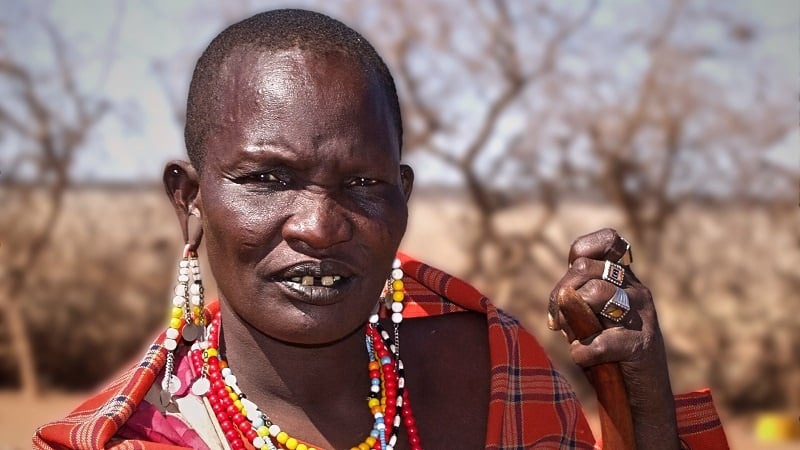 “Caution—Cows  Crossing!” The  yellow sign jolted  me out of a half-sleep.  For hours, the vehicle I rode  in bounced crazily over the plains  of Tanzania. Along the way, I saw antelopes,  zebras, and ostriches. Suddenly, seemingly in the  middle of nowhere, the triangle-shaped warning sign  stood at the side of the road. It welcomed me to Maasai  country.

From  then on,  I saw the  Maasai along  the sides of the  very rough dirt track  on which we traveled. The  tall herders with long spears  and colorful robes drove their animals  before them. Some eyed us suspiciously, others  waved a greeting. Soon the setting sun flooded the  Savannah in warm red light until it slowly gave way  to a cinematic full moon.

It  was late  when I reached  Emboreet. The little  village lay in complete  darkness. A light burned at  the mission station, however, because  of the solar panels installed on the roof.  Father Peter Pinto SVD, a Divine Word Missionary  priest from India, waited for me. “I know you just  got here,” he said, “but we need to leave right away  for a neighboring village where I have been called to anoint  someone who is sick.”

And  so my  first encounter  with the Maasai took  place in pitch-black darkness.  When we finally got out of the  car at the cluster of huts, we were  surrounded by people who wanted to greet  us. Children pressed our palms to their foreheads,  hoping for a pat on the head. The earrings of the  Maasai jingled and tinkled in the dark as they moved.  Cows grunted and bellowed softly behind the thorny walls  of their brush corrals in the center of the boma or village.

People  brought plastic  chairs for us from  their huts, washed our  hands with hot water, and  then served us sweet tea with  milk, along with dishes of goat  meat and liver. While Father Peter  went into one of the huts to anoint  the sick person, the Maasai gathered around  me and asked how old I was. “Thirty-two,”I answered.  “Excellent,” replied one of the men. Apparently, I was  just the right age to marry one of his daughters! I explained  that I was already married, but he shrugged his shoulders as if  to say: “No problem!” His offer still stood. He was willing to give  me his oldest daughter, as well as one of his younger daughters, who was  not doing well in school. This meant that he would probably have trouble finding  a husband for her. It was a really good deal. Imagine—two wives for the price of  one. Unfortunately, I did not have ten head of cattle to give him in exchange. That  was the price that they expected of a rich mzungu (white man) for such a bargain.

The  night  at the  mission station  was short. Early  Sunday morning we walked  to the church at Emboreet.  Above the door was an image  of the Good Shepherd, an image  that builds a bridge with the Maasai.  “The Maasai believe that God left them all  cattle of the earth,” said Fr. Peter. “Cattle  shape every aspect of their culture. They build  their huts from cow manure, and they drink fresh  cow blood as an important part of their ceremonies.  Any Maasai who owns fewer than fifty head of cattle is  commiserated by the others as a poor man.”

The  magnificent  songs and multicolored  robes of the Maasai made  the Mass a memorable event.  During his homily, Fr. Peter chose  his words carefully. On the one hand,  he spoke out of a deep respect for the  people. He has great regard for the distinctive  ethnic identity of the Maasai. On the other hand,  he did not hesitate to speak against traditions and  customs that are contrary to Christian values. “Over and  over again, I stress with the men that they must be respectful  towards their wives and treat them as equals,” explained Fr. Peter.  “I insist that the children must be allowed to go to school, and I argue  strongly against the practices of female circumcision and the forced marriage  of the young girls.”

Fr.  Peter’s  words have  not been in  vain. The Maasai  understand that the  missionary’s interest in  their wellbeing is not simulated,  but is honest, upright, and wholehearted.  Fully half of those who attended Mass were  patients from the clinic that Fr. Peter established  close to the mission station. I accompanied him on his  rounds through the forty-five-bed facility. People with simple  complaints and minor wounds greeted us. A Maasai girl named Silau  was very ill. While playing with her friends, she climbed into a tree  and encountered a hive of wild bees. Swarms of bees stung her viciously.  Now her face was puffy, red, and grossly swollen, and she could hardly see  through the narrow slits of her enlarged eyelids.

A  thick  dust cloud  followed us as  we set out across  the Savannah in Fr.  Peter’s ambulance after  lunch. We passed the landing  strip laid out for the team of  “flying doctors” who regularly stop  at Divine Word Missionaries’ walk-in clinic.  A group of Maasai women and children waited patiently  for us in the shade of a large tree. Fr. Peter and his  nurse assistants inoculated pregnant women, weighed newborns, and  dressed smaller wounds.

I noticed  one little  boy whose arm  ended in a prosthesis.  The people who live in this  area close to the Tarangire National  Park are regularly attacked and mauled  by wild animals. When that happens, Fr.  Peter rushes to the scene and sets off with  the patient on the trip to the hospital in Arusha.  “Many don’t survive that long trip,” he told me. Thinking  back to the pothole-riddled track that I bounced over the previous  day, I understood.

Another  picture-perfect  sunset accompanied  us as we returned to  the mission station. Fr.  Peter told me of his plans  to expand the clinic by adding  an operating room. Badly wounded people could  be treated and deaths on the bumpy road to the  hospital reduced. “Just last week,” he says, “I had  a young, pregnant woman bleed to death on the way to  the hospital in Arusha. We just weren’t able to do anything  for her in our simple clinic here.”

Once  again,  the only  light I saw  was in the hut  of the missionaries.  I asked Fr. Peter whether  there was enough juice in the  batteries to charge my camera. “You  can always try,” he said. I confidently  plugged in my charger—and the mission station  plunged into sudden darkness! We wished one another  a good night, and I used the light from my cell phone  screen to find the way to my bed.