A Home of Care and Love

By Andrzej Danilewicz SVD on February 6, 2020 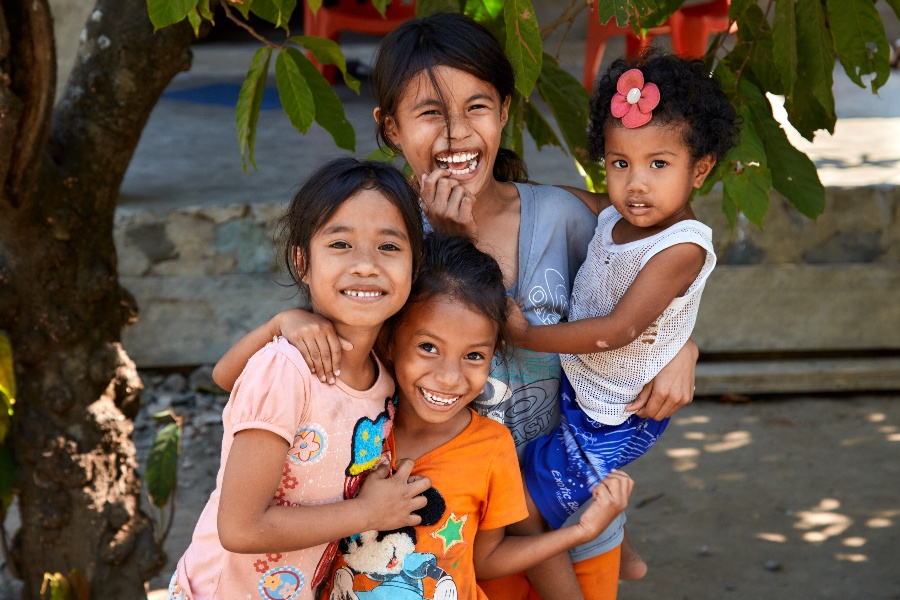 The island of Lembata is not No. 1 on Indonesia’s plentiful list of tourist attractions. It was little wonder, then, that I was the only foreigner on a ship traveling from the nearby island of Flores. My destination was an orphanage in Lamahora.

It is there that I met Regina Sura, a middle-aged woman with a serious look in her eyes and a smile lurking at the corners of her mouth. Regina learned how to work with orphans from the local nuns. The beginnings were simple. She gathered eight abandoned children and tried to be a mother to them.

An Orphanage Becomes a Reality

Word of her endeavor reached Father Eugene (Gene) Schmitz SVD, district superior for Divine Word Missionaries. Fr. Schmitz worked for 36 years as a missionary pastor and seminary dean on Lembata. Two months before his death in 2005, he had begun a new assignment as vicar general of the Diocese of Larantuka. He was the last North American Divine Word Missionary allowed by Indonesia’s government to remain in the country on a permanent assignment.

In 2003, shortly after hearing of Mrs. Regina’s work, Fr. Schmitz collected funds to buy some land for an orphanage. Brother Damian Watun SVD, together with students from his carpentry school, built a house. Then, following prolonged negotiations, city authorities formally recognized the orphanage’s existence. Nevertheless, the authorities limited their material support to 100 kilograms of rice per month.

Today, the Orphanage Is a Place of Great Order and Joy

After only one hour at the orphanage—“Eugene Schmitz’s House,” as the locals call it—my companion, Father Fransiscus Laka SVD, and I became enchanted. Not just by the welcome songs and dances that greeted us. And not just by the delicious bread baked by Mrs. Regina. We were captivated by the overall atmosphere–—a home of care and love. We watched as the older children cared for the younger ones and as the younger ones shared the sweets they had just been given, forgetting their own wants. When a 4-year-old boy hurt his knee, his little friends—like seasoned nurses—took care of the wound and tried to comfort him.

There was a buzz of excitement all over the orphanage, yet the excitement was orderly. Except for the smallest ones, each of the 39 children has a task: tending a vegetable garden, looking after the small farm of chickens and a few goats and pigs, cleaning the house and grounds, laundering clothes, cooking, washing up, gathering firewood from the forest. Older girls were taught the arts of sewing and embroidery.

You could see that Mrs. Regina and Pius Kulu, a retired teacher who helps at the orphanage, are determined that the children learn all the skills they would normally have learned at home. It will make life easier for them once they are on their own in the real world.

The playful mascot of the house is 3-year-old Vera, pure quicksilver, a bundle of energy, interested in everything. She laughs as often as she cries. A few days after birth, Vera had been abandoned in the city market; she was found and brought to the orphanage. Her mother was eventually located, but tragically she died soon after, and Vera was sent back to the orphanage.

A Day in the Life of the Children

It was five o’clock in the morning and sounds of prayer woke me. To my surprise, I discovered the children reciting the morning prayers of Divine Word Missionaries, even singing the Veni Creator. Older and younger, they sang with one voice, without any adult supervision. I could not believe it.

Prior to their morning prayers, the younger children already had watered the garden and swept the grounds and the older children already had prepared breakfast. At the meal, all primary, secondary and high school pupils wore a uniform: white shirts and red trousers or skirts. It is not particularly far to their respective schools, but classes start at an early 6:30 a.m. Again, the children gathered for prayer at 3 p.m. to say the Chaplet of the Divine Mercy along with many other prayers they have learned from Bro. Damian. They prayed sitting on the floor in a hall, which also serves as their main dining room, a playroom and a place to do homework.

Giving Them a Life Full of Love

Sadly, our visit lasted only two days and it was soon time for Fr. Fransiscus and I to say our goodbyes. The children were given the day off to walk their “Polish guests” to the plane. The airport was only a few hundred meters away, but we proceeded slowly, matching our steps to the 2- and 3-year-olds. Vera, timid at first, and another girl each took me by the hand and we marched like that. I regretted the airport being so close, as it seemed our trip came to an end all too quickly. We boarded our plane. Adults and children waved to us as they waited for the plane to depart and continued to wave even after our plane was high above the ground.

On board the Indonesian TransNusa aircraft, the traditional safety announcement finished with a call to pray for a good flight. I said a prayer for the beautiful children we had just spent two unforgettable days with. I prayed that their journey through life would be full of love.

All over the world, Divine Word Missionaries work to bring peace and justice to those in need. Read more about our efforts to advance the cause of the marginalized and defenseless.