A Cocoa and Coconut Plantation in Papua New Guinea 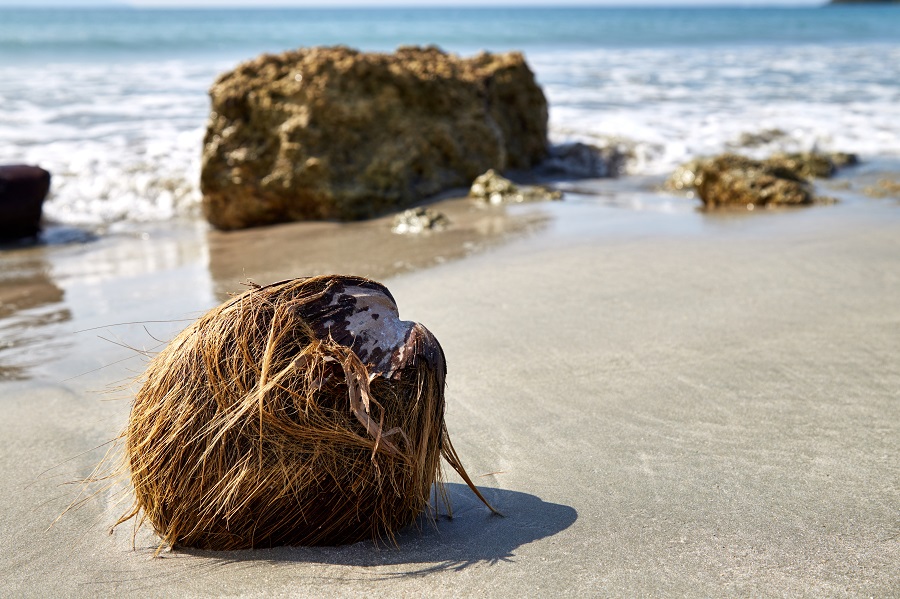 Divine Word Missionary Brother Larry Kieffer SVD faces some of the same problems that farmers everywhere experience—uncertain weather, insects, and changing prices. Bro. Larry, a native of Bellevue, Iowa, has been a missionary in Papua New Guinea for forty-four years. Divine Word Missionaries has about a hundred members in that South Pacific country.

Several times a week he hops into his battered Nissan truck and drives into the bush on pothole-filled roads to inspect Divine Word Missionaries’ cocoa and coconut plantation located about twenty-five miles north of Madang.

While visitors are pouring sweat, he barely notices the ninety-degree heat and high humidity of the tropical forest. It is easy to understand why Bro. Larry has a sweater with him, even on summer days, when he visits Iowa every three years.

“Good morning, Joseph,” Larry greets a smiling man who runs the day-to-day operation of the plantation. At age seventy-eight, Bro. Larry is “sort of retired,” but is the general manager. The plantation, nestled along the banks of the Pacific Ocean’s Bismarck Sea, has about 460 acres.

Providing Employment and Funds for Mission Work Through the Plantation

“Oh, look at the nice new growth,” Larry says, pointing to the cocoa trees that grow amid the towering coconut trees. Healthy plants are always a concern. Right now the problem is the cocoa pod borer, a nemesis that penetrates the cocoa bean and eats the meaty interior. Damage this year could be as high as fifty percent.

Farmers in Queensland, Australia, have fought the same problems and are on the verge of defeating the pest. Deep in the jungle, Bro. Larry finds Michael, who is hulling coconuts, harvesting the inside flesh that is known as copra once it is dried. It is a source for coconut oil.

Later, we visit six women who are opening the cocoa pods and removing the precious beans that will become chocolate. At the bush plantation headquarters are buildings where furnaces fed by coconut husks dry the coconut flesh. Just outside are large concrete platforms where the sun is drying the cocoa beans. A low-profile roof on rails covers the beans at night to keep out animals and possible rain.

The plantation produces about 1.5 tons of copra per week in good conditions, and two tons of cocoa beans per month. Income, as for most world commodities, depends on the market. Coconut oil prices sometimes soar to a record high because of a copra shortage. Papua New Guinea is among the top ten producers of coconut in the world. Brother Larry was getting $150 for a bag of copra weighing approximately 136 pounds.

The plantation provides jobs and income for about forty people. The income also supports a number of missionary services in the area, such as building and maintaining churches, health centers, and schools.

Papua New Guinea has changed since Bro. Larry first arrived. There are no longer headhunters in the Highlands, the mountainous region west of Madang. The country gained its independence from Australia in 1975 and is growing and gradually taking its place in the family of nations. Long ago, an earthquake greeted Bro. Larry during his first night in Papua New Guinea, and a number of years ago, a powerful tsunami struck the coastal area several hundred miles northwest of Madang. Earthquakes are still a threat, but the earth and volcanoes on nearby islands have been quiet in recent months.

The region sits on the Ring of Fire, an earthquake-prone circle that runs down to New Zealand and then up through Chile, California, and Alaska before swinging back through China and Japan. The last great earthquake in the region was in 2011.

About eighty percent of Papua New Guinea’s seven million people live in rural areas. Life for them is still one of day-to-day subsistence. The few roads that lead into Madang are packed with walkers since few people own vehicles of their own. Some people wear flipflops and many are barefooted. A public bus system does operate in Madang Province. Many farmers have open-air markets along the roads.

However, Madang has several modern, air conditioned food stores. There are electronics stores and stores that sell a variety of merchandise. There is even a resort with a nine-hole golf course tucked along a Pacific cove.

“We have a small upper class and then the lower class,” Bro. Larry explained, “and a few in the middle.” At the plantation, there is an idyllic spot where the thick bush gives way to the brilliantly clear, blue-green water of the Pacific Ocean. A man fishes at the mouth of a broad inlet.

Another, just east of a clearing, gently rocks his child in a small hammock outside the family’s thatched house. There is a short dock for fishermen and boaters nearby. Next to it is a grassy, shady area, a popular spot for picnics.

Schools, Sacraments, and a Vocation Fulfilled

There is an elementary school on the plantation and a monthly health clinic for babies and children. At St. Joseph the Worker Church on the plantation, Mass is celebrated on Sundays for the workers and people in nearby villages.

Divine Word Missionaries are well known in Papua New Guinea, a nation in a remote part of the world often regarded as the last frontier. Other Catholic religious orders and Protestant churches have mission operations in Papua New Guinea as well.

Madang is home for Brother Larry, a 1953 graduate of St. Joseph’s High School in Bellevue. The farm boy who grew up north of Bellevue in frigid winters and hot summers is happy and comfortable with life and temperatures in the equatorial zone.

At a small chapel, he participates in weekday Mass with Archbishop Stephen Reichert (originally from Kansas), and other archdiocesan priests, officials, and staff, while the squawks of native birds and a distant crowing rooster join the liturgy. Brother Larry lives at the archdiocesan complex in Madang, a coastal city with a population of 25,000. His small office and living quarters are in one of the half-dozen or so buildings of the complex an easy two-block walk from the cathedral.

It still takes a month for mail to reach Madang and Bro. Larry. Now he depends more on the Internet, if the system is working. He sends e-mails and logs onto Bloomberg for the latest market information. And, of course, he checks the latest news on his beloved Cleveland Indians. Thanks to his innovative driving, Larry misses eighty percent of the potholes in the road on the return trip from the plantation to Madang.

He is happy as a missionary and farmer in Papua New Guinea, and he summed it up with a simple, reflective statement, “I could not have made a better choice of vocation or missionary country in which to live.”

Dale Kueter and his wife, Helen, visited Papua New Guinea, Australia, and New Zealand in April and May 2014. While in Papua New Guinea, they visited Brother Larry Kieffer SVD and later wrote about their visit for the Divine Word Missionaries magazine. Dale and Bro. Larry are life long friends who grew up on neighboring farms near Bellevue, Iowa.

Learn more about the many places and ways that Divine Word Missionaries are serving the Global Church.